POSTED BY Ahava 14.05.2017 in PLAYERUNKNOWN'S BATTLEGROUNDS

PUBG Lead Animator smookie___ had a dev stream on twitch today and we got to ask him some questions about the future of the game.

Our Questions for him:

Our first question was if there will be an in-game report feature in the future. Unfortunately smookie___ didn’t answer us directly but two of his channel moderators did. Both confirmed us that this kind of feature is planned for the future. 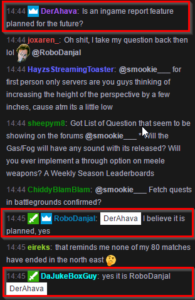 We asked if there is going to be any more uses for boats, for example a water town, only accessible by boat. He told us that he doesn’t know about any plans of a water town, but that it could be an interesting idea. We hope that a feature like this gets included in the future. (Clip)

To the question if there is going to be environmental destruction in the future we got told that unfortunately there won’t be any. (Clip)

The releasing of the server files eventually might be planned, unfortunately he didn’t want to tell us any more than that. (Clip)

Then we asked about what exciting upcoming features he can tell us about. In the future melee will be more playable, for example you will be able to time your attacks by pressing and holding. (Clip)

Another user asked him if there is any ETA on first person servers. He said there won’t be any soon, either on full release or the very end of early access. Prior they’re going to have to improve the quality of first person. (Clip)

Finally we asked if he could show us what settings he suggests to play fluidly. What he suggests is (Medium/Low/Very Low/High/Medium/Very Low/Low). Keep in mind though that he uses a Ryzen r7 1700 and a GTX 1060, so the settings might differ for your system. (Clip)

He also reinstated that leaderboards are meant to be reset every month and he is unknowledgable to why they still have not been reset.

Ranking systems/rewards and achievements will be implemented but not soon.

2X Scope outline will be made thinner.

Ability to draw on the minimap is not planned (Answered by Community Moderator).

New drinking Animation is coming next update, all healing and boosting items will be receiving their own respective animations and will leave a trace in the game world for a small time.

Kill distribution is being adjusted.

Extra uses for Melee weapons will certainly not be happening anytime soon.

KillCams, Death replays will be added! (For solo mode).

RaconBang on Reddit gathered the following news on the stream:

Also news/tips mentioned so far (I will update this):

Talos, is a new and upcoming gaming community from Germany with a focus on E-Sport. The name Talos comes from the greek mythology and describes...

We use cookies to ensure that we give you the best experience on our website. If you continue to use this site we will assume that you are happy with it.OkPrivacy policy